Big Levels! Moth to the Moon Updated to Version 1.4! 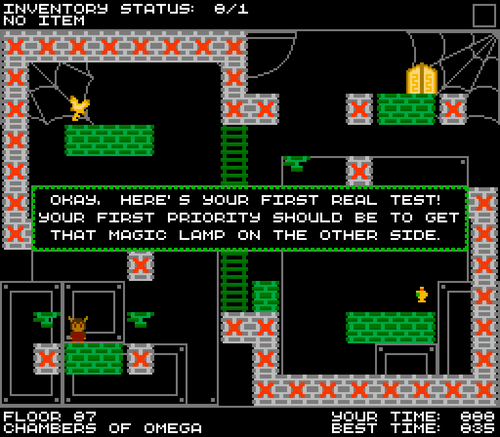 Season's greetings, everyone! I've prepared a little gift for all of you good kids out there; I've added some more content to Moth to the Moon and used many of the features added to the level editor with the previous update to create eight more mean puzzles! Aside from the new stages in the main scenario, I've also added an optional hint system that may offer some assistance for those tougher levels. I've also included a few smaller adjustments, such as adding three more pages to Sue's secret sketchbook, changing the format of the custom level file to make it more easily recognizable, and rebalancing the difficulty of the second boss encounter.

The main scenario has been expanded with eight new stages that make use of some new features. Some of the new stages are larger than previous stages have been and take up more than one screen's worth of space! The conveyor blocks and switches, as well as the annoying chisel beak enemy, are all introduced in this new level set and promise to offer some unique types of challenges. The ignorance totem and the great serpent have yet to make an appearance in the main scenario, as I am planning to introduce them later on, but they have been fully functional since the last update and can be played around with in the level editor to your heart's content!

In an attempt to make the game more accessible to players, I've implemented individual hints for every stage in the main scenario. Originally, I was planning on creating a separate tutorial stage, but I felt like there are too many mechanics to try and learn all at once, and it would be simpler for the player to progress through the main scenario as normal with a little bit of assistance along the way. By pressing Z while the game is paused during a stage, a hint will be displayed. The hints generally try to nudge you in the right direction of a solution, but they'll also explain the purpose of items appearing for the first time in the main scenario.

Get Moth to the Moon

Moth to the Moon

It's always good to wear protection.